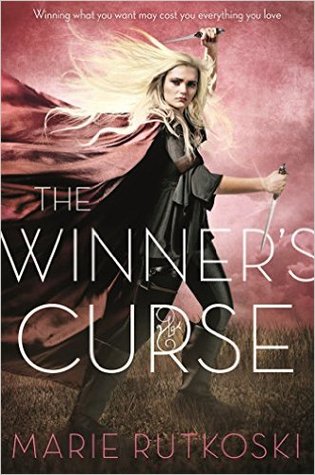 This is the first book in The Winner’s Trilogy, again this book was a recommendation. I seem to have a hard time choosing my own reads, if left to me I would be buying one of everything in the bookstore.

Winning what you want may cost you everything you love…

As a general’s daughter in a vast empire that revels in war and enslaves those it conquers, seventeen-year-old Kestrel has two choices: she can join the military or get married. But Kestrel has other intentions.

One day, she is startled to find a kindred spirit in a young slave up for auction. Arin’s eyes seem to defy everything and everyone. Following her instinct, Kestrel buys him—with unexpected consequences. It’s not long before she has to hide her growing love for Arin.

But he, too, has a secret, and Kestrel quickly learns that the price she paid for a fellow human is much higher than she ever could have imagined.

Set in a richly imagined new world, The Winner’s Curse by Marie Rutkoski is a story of deadly games where everything is at stake, and the gamble is whether you will keep your head or lose your heart.

I am not usually interested in the fantasy genre, however a sales rep convinced me to buy several recently. I started with Rutkoski and this was a great choice, her writing style and character development tells an amazing story. The main character is the daughter of the general, who accidently flips her world on its head. The girl who can read everyone just couldn’t read the one person her friends and people need her to, you spend the whole book questioning how she will fix this new problem she has gotten herself into.

I am very happy I had already purchased the second book in this trilogy when I finished the first and I will be running out to purchase the third and final book very soon. I have been in a reading rut and this series seems like just the thing I needed to get me out. The romance and suspense keeps me up late with an inability to put this series down.

I will post about the second book The Winner’s Crime soon.

I hope you enjoyed my escape and find one of your own – keep on reading. 🙂